A few more memories I found during my clear out 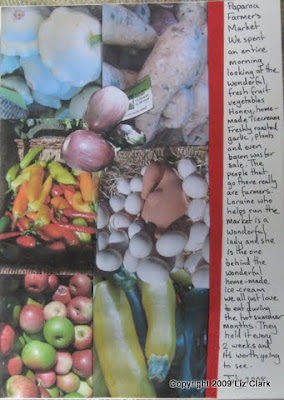 I found my photo journal I've filled in now and then with different photos and what they were about. In fact it's an old self help book I didn't find very useful so I used it for another purpose. And I think it's helped now a lot. I like this one. These are photos I took at the Paparoa Farmer's Market last year. July 2008 to be exact. Real farmers are there with a fantastic variety of great food and organic produce. I had a lot of fun photographing what was on offer and getting to meet some of my neighbours to catch up with a talk and see how everyone was. That day our local council was there talking about their local district plan. Even those on the Kaipara District Council mostly are farmers. Loraine who helps organise the market makes the most fantastic home made ice cream she is such a lovely lady to know. We have bacon, fresh fish, free range eggs and so many other things. The best thing too is that the kids can play on the swings and slides right alongside the carpark where the market is held. Paparoa is a beautiful little town and worth visiting. I love the old buildings and the villas there. The old bank is now a wonderful restaurant named Sahara and their food is just awesome. They even have Sunday afternoon jazz there. worth checking out if you're ever over our way. 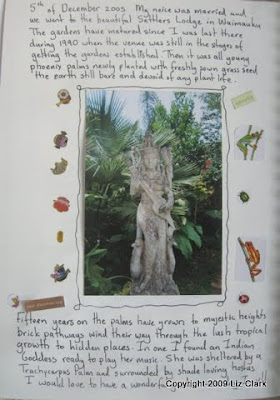 Another fantastic place I have visited several times is the former Settler's Lodge now renamed as Settler's Country Manor. It used to be the former Waimauku Dairy Factory which for many years was used as a country craft shop, then late,r it was developed into a restaurant and function centre. The gardens I have watched right from their early beginnings over the last 17 years or so develop into a glorious paradise with secret hidden places such as the one above. I took this one of course with my little Kodak instamatic camera when my neice had her wedding reception there. I've attended another wedding there since and my brother in law's 5oth Birthday - then I had the digital and managed to get some awesome night shots. Waimauku used to be a quiet sleepy place you passed through on State Highway 16 on the way to Helensville where I lived for nearly 20 years. A left hand turn takes you on the road to Muriwai Beach. I used to ride my horse there many years a go. Bareback at full gallop is a lot of fun - now that I really do miss. 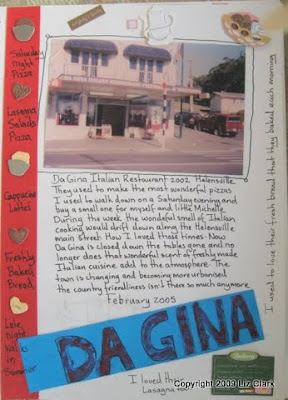 The old Da Gina Italian Restaurant brings back great memories for me. When I lived in the rural township of Helensville from 1985 to 2004 I raised my eldest daughter there, built my first home with my now former husband David and for the first five years I was there I didn't know anyone except my younger sister and her husband and his family. After I started working at the local timber yard I got to know more people. In 1999 Dave left me and I became a single paret raising three children by myself in our first home. My eldest went to live with her father when she was 15 and I was alone with Inaya and Michelle both still babies then. From that point on I learned to make the best of a difficult situation. A couple of years before I bought the farm I really did manage to start enjoying both my home and the girls. The best thing of all were the warm summer nights when I would take Michelle down in the stroller and stop in at Da Gina to get a pizza or some lasagna on a Saturday night. I loved the township and still do but it's changed. It isn't the same anymore. It's become more urbanised as more families from Auckland have moved up there realising that it isn't so far away after all. I remember when people would tell me that Helensville was such a long way - the truth was it was barely half an hour's drive from Auckland City longer now more traffic is on the road. The train service was restarted but sadly it's just been canned. Maybe in another few years when more people are there they might just fire it all up again. 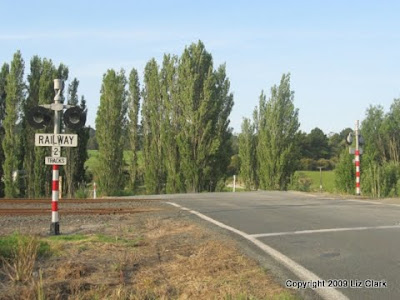 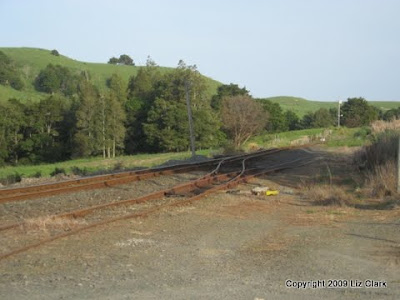 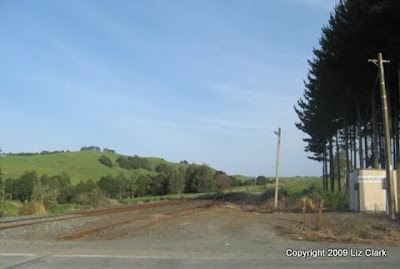 And talking about trains and stuff this is the crossing near where I live. Our warning signals there have a strange little quirk every so often. This little quirk usually has the technicans from On-Track driving over from wherever they are based and spending a long while in that little white shed with Maungaturoto marked on it. Yes you would expect the bells to go off whenever there is a train approaching the crossing - not these bells. They go off whenever they feel like it - train or no train. So when it's like that it's get out of the car. Take a nice long hard look at either end of the railway tracks. Hope like hell it's only the wind whistling and then cross over the tracks with the vehicle and hope like heck you ahven't make the wrong call. Last time it happened there was a queue of cars waiting....waiting...waiting..In the end we all decided the imaginary train had passed on by and continued on our journeys. I thought I'd share that little story. One day those bells might just behave themselves - or not.
Email Post
Labels: altered book farmers market paparoa photo journal