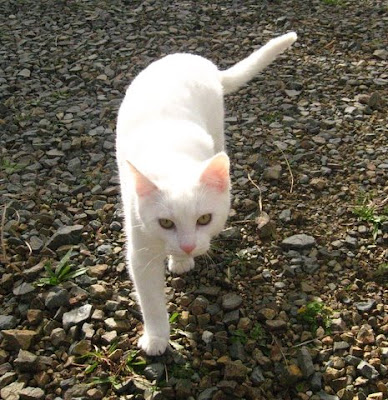 I'm not sick hoomans now giz leg to claw nowz
Why me? Sasquatch got me on the leg while I was feeding out soooo unfair..mean kitteh
It seems that Mr Sicko has been really hammering my family these last few weeks. I get the flu and it's taken forever to go. Inaya got sick with gastric virus, and now yet another of the family is sick. Such is life though. I've been looking after sick people and feeding out hay and hard feed to the hungry bunch of bovine and equine vultures out there still glaring at me from the paddock next to my house. My life at the moment seems to be a surreal Dali painting. I want my life back thanks. I hate winter always will hate winter, but I suppose nature says that's how the cycle of life goes. 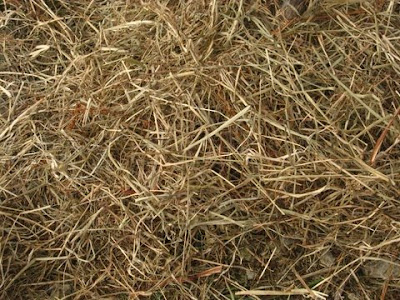 So what's been happening on the Mad Bush Farm...nothing. Shift stock, feed out hay, clean up poo and do it all over again the next day. Boring boring boring..but I get to talk to my creatures I suppose. Last year poor Sasha was suffering from terrible illnesses and infections. This year she's a different picture all together. Not bad for rising 23. She's now galloping to her feed instead of struggling to make it there. No more weight loss she's actually put heaps on. 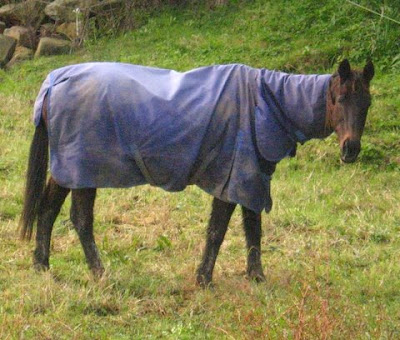 And then there is the Terrorist...This month on the 29th of July the Terrorist will turn one year old. Yes she has grown a lot but she is still the tiniest Jersey I have ever seen. She thinks still she should be inside my house rather than out in the cold paddock in the rain with those moo things she still can't stand. Hay has become her friend - but as usual it is still not good enough that the baby of the Mad Bush Bovine Crew is being treated as a..........COW. Totally unacceptable in The Terrorists view. Moo has not yet developed. I still get meeeeeeeeee but no moo. NO CALVES THIS YEAR TO RAISE I FLATLY REFUSE!!!! No more!!!!!!! 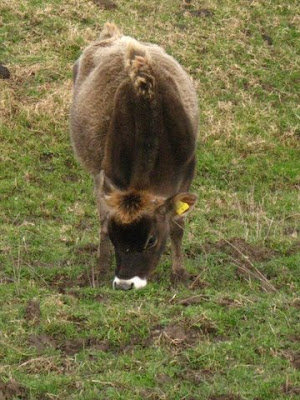 All things considered today is the first day I have actually felt close to 100% like my old self again. Maybe for once I can actually sit down and find a chance to go and visit some blogs without feeling the need to go and lie down or have to go and take care of yet another sick family member. I've just realised as well that River will 3 years old on the 10th of July. Another small calf I raised but she was much bigger than the Terrorist and that was the day she was calved. She was 18kg - the Terrorist weighed around a mere 6 or 7 kg. Tiny very tiny. 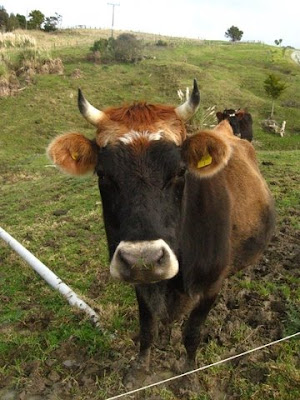 Looks like our calving dates were all up the shoot. River is now so huge she looks like she is going to explode. Being a first calver usually means their udders start to fill in the 3rd of 4th month of preganancy. She still has a wee while to go. We are hoping she is not carrying twins. The bull we have now may carry a gene that causes twins. Our previous bull seemed to father a lot of twins when he was out tailing off on dairy herds. I do not want twins - not with a first calver. So we'll see what happens there. Calving time for the Dairy Herds will be later this month. The cows will start calving and it's back into the shed for the next season. One thing people should watch out for if they're planning to breed cattle and that is a nasty disease called Rotavirus. Last year a farmer I knew of lost 12 calves in two days to Rotavirus. It pays to vaccinate the herd against it to save a lot of heartbreak and calf mortality on the farm. Worth a consideration if you are on a small farm like mine as well. Don't take chances. Better to vaccinate then end up with dead calves.

Onto some other stuff....

NOTES FROM THE LAND OF GONZO

This time it's Amy's turn to share some insight into Asperger's Disorder and how it has affected her family. This is a great post and well worth taking the time to read. Check out Amy's post here 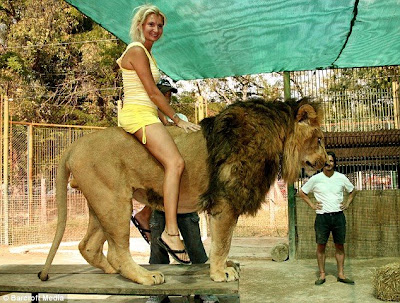 
I've seen some really bad things in my time but this just has to top the list of bad things. A friend of mine Natalie who is an animal behaviourist sent me a link to an article in the Daily Mirror.
Lugan Zoo in Argentina is run not by logical conservation minded people - but by a bunch of certified Village Idiots. I kid you not . According the the Daily Mirror Lugan Zoo near Buenos Aires in Argentine allows visitors to literally man handle the animals. Children have been allowed to enter the enclosures of adult tigers and worse still, a four year old male Lion named Alan has been subjected to the worst kind of humilitation any animal could have. In my eyes this Zoo should be shut down. It does not deserve to even have the animals. This is nothing short of absolute and utter inhumane cruelty - not to mention careless and reckless endangerment to public safety. Read the article from the Daily Mirror here 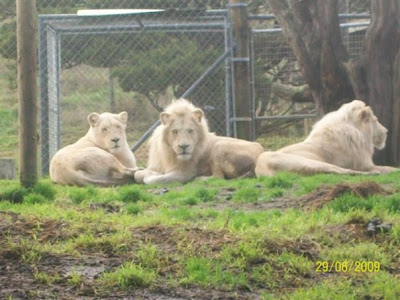 Imvula, Timba and Tamba have a morning lie down after the excitment of the weekend. - Caption & Image Credit: Sara Reid Zion Wildlife Gardens

The tragic death of Dalu Mcnube on May 26th had left the staff at Zion Wildlife Gardens reeling. The park was temporarily closed while an investigation was undertaken by MAF, the Department of Labour and the Police into the tragedy. MAF allowed the park to re-open once further safety measures had been satisfied. The appointment of Tim Husband of Zooworks has seen a positive and fresh new start to the park with new intiatives already been put into place for the benefit of the 42 big cats residing at the park. MAF have put a stop to the hands on contact of the adult Lions and Tigers to ensure staff and public safety. Despite this ruling Zion Wildlife Gardens had a very successful re-opening with over 500 people turning up during the course of the weekend of the 27th & 28th of June. Local businesses in Whangarei have also chipped in by sponsering the big cats. 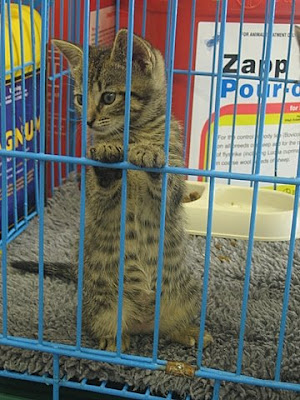 Well that's me for this blog post. Early night tonight so I can get up tomorrow and do the same old routine and finally catch up with several weeks worth of blog posts from all of my fantastic blogger friends. I have some more news to share including an award I received from Diane at My Gemstone Box and I won some pink earrings as well. THANK YOU DIANE!!!!

AND THANK YOU TO ALL OF YOU DEAR WONDERFUL PEOPLE WHO HAVE CARED SO MUCH ABOUT ME AND MY GIRLS. I WILL BE CATCHING UP WITH ALL OF YOUR COMMENTS AND ANSWERING EACH ONE INDIVIDUALLY AS WELL AS VISITING YOUR BLOGS TO THANK YOU ALL.
Email Post
Labels: 15kg terrorist amy Aspergers Disorder farm hay Lugan Zoo Notes from the Land of Gonzo River village idiots zion wildlife gardens